Thirty-three passengers and one crew member are tragically presumed dead after a deadly fire consumed their diving boat on Monday, September 2nd, 2019 [1]

The Coast Guard received a distress call before dawn from the Conception, a 75-foot commercial scuba diving vessel near Santa Cruz Island in the Channel Islands. The captain’s message was chilling, the vessel was on fire and its 33 passengers were locked inside the vessel. [2]

First responders from the Ventura County Fire Department responded within 15 minutes, but found the Conception completely engulfed in flames. They struggled to extinguish the fires. [3]

Of the 39 souls onboard, only five were successfully rescued by a nearby fishing boat, The Grape Escape. The five survivors, all crew members, were all above deck when they noticed the fire. Bob and Shirley Hansen, owners of The Grape Escape, give key details about the fire.

“When we looked out, the other boat was totally engulfed in flames, from stem to stern […] I could see the fire coming through holes on the side of the boat. There were these explosions every few beats…” [4]

The cause of the fire is still unknown, but reports indicate it erupted suddenly and moved swiftly. Tanks of propane, oxygen, and nitrox were reportedly onboard. The latter two are typically used for diving and, while not explosive, could further feed a growing fire. [5]

Additionally, some surviving crew members have speculated that the fire may have originated from an overnight charging station set up for cameras and cell phones, located in the vessel’s galley. The lithium batteries commonly found in this equipment have been known to ignite and are another potential source of the fire. [9] According to the crew, they believe the flames began in the galley area, as opposed to the vessel’s engine room.

“The galley area was engulfed in flames. They tried to enter through the double doors but couldn’t get in because of the flames.” [10]

Both federal and state law enforcement agencies are currently on scene, and the investigation of the source of the fire is ongoing.

Two factors which may have contributed to the deadliness of this incident are the lack of multiple routes of egress from the sleeping compartment and the fire suppression systems in a key area of the boat.

The Conception was operated by Truth Aquatics, Inc. A former passenger who sailed on another vessel operated by Truth recollected, “[…] there is only one exit and entrance, a staircase you may have seen in some of the website photos. So it isn’t hard to imagine that a fire could have caused tragedy.” [8]

A commissioner with the National Transportation and Safety Board (NTSB), currently investigating the incident, stated that she was “taken aback” by how difficult it was to access the emergency exit hatch that led from the bunkroom. She explained that in the dark the light switches could not be seen, and that she “couldn’t see the people in front of [her]” when the investigators attempted to recreate an emergency exit on a similar boat to the Conception. [11]

One publication quoted an experienced open-water diver, who speculated that if the fire began in the galley, it would make “it impossible for the crew to reach the guests and the guests unable to evacuate.” [6]

According to the official floor plan of the boat, passengers had access to just one staircase from the bunk room to the deck, and the galley is located between them. Passengers sleeping in the bunkroom at the time of the fire would likely had been trapped and unable to escape.

While boats typically have fire suppression systems in the engine room, they are not usually installed in the galley. [7]

Initial reports from the investigation also indicate that Truth Aquatics, Inc. may have had inadequate safety measures. According to a news source, the Conception failed to provide a roaming night watchman, a crew member who stays awake to alert passengers and crew members to signs of danger, in addition to other possible safety deficiencies. [12]

On Sunday, September 8, 2019, various law enforcement agencies, including the FBI and the U.S. Coast Guard, served warrants at the headquarters of Truth Aquatics, seeking materials regarding safety, training, and maintenance practices and records. [13] Further information is anticipated as these various records are analyzed. 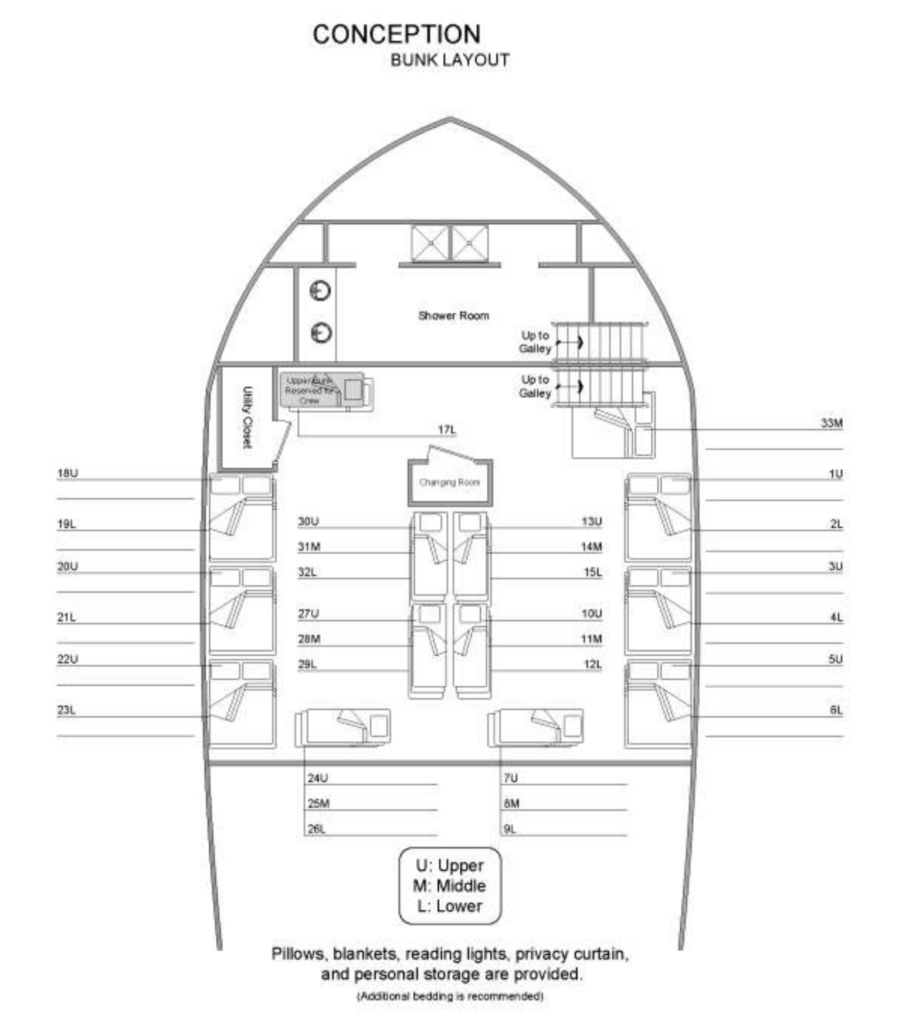 Unfortunately, the fire which consumed the Conception highlights the need for multiple emergency egress routes on commercial vessels serving large groups of people.

We understand this is a difficult time for both those directly impacted by this tragedy and for the wider boating and diving community in general. Rains Lucia Stern St. Phalle & Silver, PC is committed to providing assistance, guidance and representation for any of those that have suffered loss as a result of this preventable tragedy.

Our lawyers have a record of enacting change outside of the courtroom when laws in this country do not sufficiently protect the lives of its citizens. We have helped draft legislation that continues to keep people safe beyond our involvement in cases, such as our work with SB 721 and SB 1465 after a deadly balcony collapse in Berkeley killed or injured over a dozen students.