This morning, the California Supreme Court issued its highly-anticipated decision in Alameda County Deputy Sheriffs’ Association, et al. v. Alameda County Employees’ Retirement System, et al., (“Alameda”), reviewing the “California Rule” with respect to public employee pensions. The Supreme Court affirmed that employees earn, upon commencement of employment, a vested right to the pension benefits then in place, a right which is protected by the contracts clause of the California Constitution. However, the Court revised the test to be applied when pension benefits are modified. In doing so, the Court rejected the employees’ claims in Alameda that certain changes made by the Public Employees’ Pension Reform Act (“PEPRA”) were unlawful.

The California Rule, as it existed prior to the Alameda decision, was described in Allen v. Board of Administration (1983) 34 Cal.3d 114, 120 as follows: “With respect to active employees, we have held that any modification of vested pension rights must be reasonable, must bear a material relation to the theory and successful operation of a pension system, and, when resulting in disadvantage to employees, must be accompanied by comparable new advantages.” (Emphasis added.) In other words, the pension promised to an employee at the beginning of their career could not be reduced without being offset by a “comparable new advantage.”

In Alameda, the Supreme Court recognized that the changes enacted by PEPRA imposed disadvantages to employee pension rights that were not offset by comparable new advantages. However, the Court held that the legislature’s purpose in modifying the County Employees’ Retirement Law’s “very broad and general definition of ‘compensation earnable’” to prevent employees from artificially inflating their pension benefits (i.e., “pension spiking”) justified the disadvantage because the modifications “bear some material relation to the theory of a pension system and its successful operation.” Finally, the Court held that providing employees with an offsetting new advantage in exchange for restricting the employees’ ability to receive increased pension benefits would be inconsistent with the purpose of PEPRA’s modifications. Consequently, the Court held that the PEPRA provisions at issue did not violate the contracts clause.

The Court also rejected the employees’ equitable estoppel claim on which they prevailed in the Court of Appeal. The employees argued that they relied to their detriment on representations made by their employers and the county retirement systems that the pay items at issue would be included in the calculation of their pension benefits. However, the Court found that the employees did not have a reasonable expectation that the promises made by the county retirement systems meant anything other than those systems would provide benefits commensurate with what is allowable under CERL generally.

Despite the Supreme Court’s rejection of the employees’ claims and the newly-modified California Rule, the decision makes clear that the legislature and public employers do not have unfettered authority to reduce pensions. Specifically, the Court confirmed that reducing promised pension benefits solely to save money is improper, citing Abbott v. City of Los Angeles (1958) 50 Cal.2d 438, and the Court’s recognition that pension systems are “essential to attract qualified municipal employees.” More fundamentally, the Supreme Court rejected the State’s invitation to reconsider the California Rule in its entirety. Nevertheless, it remains to be seen what legislative purposes may be deemed sufficient to justify future impairments to vested pension rights and under what circumstances comparable new advantages may be deemed inconsistent with those purposes.

The Alameda opinion is detailed and complex. We will continue analyzing the Supreme Court’s decision and intend to provide further commentary in the near future. 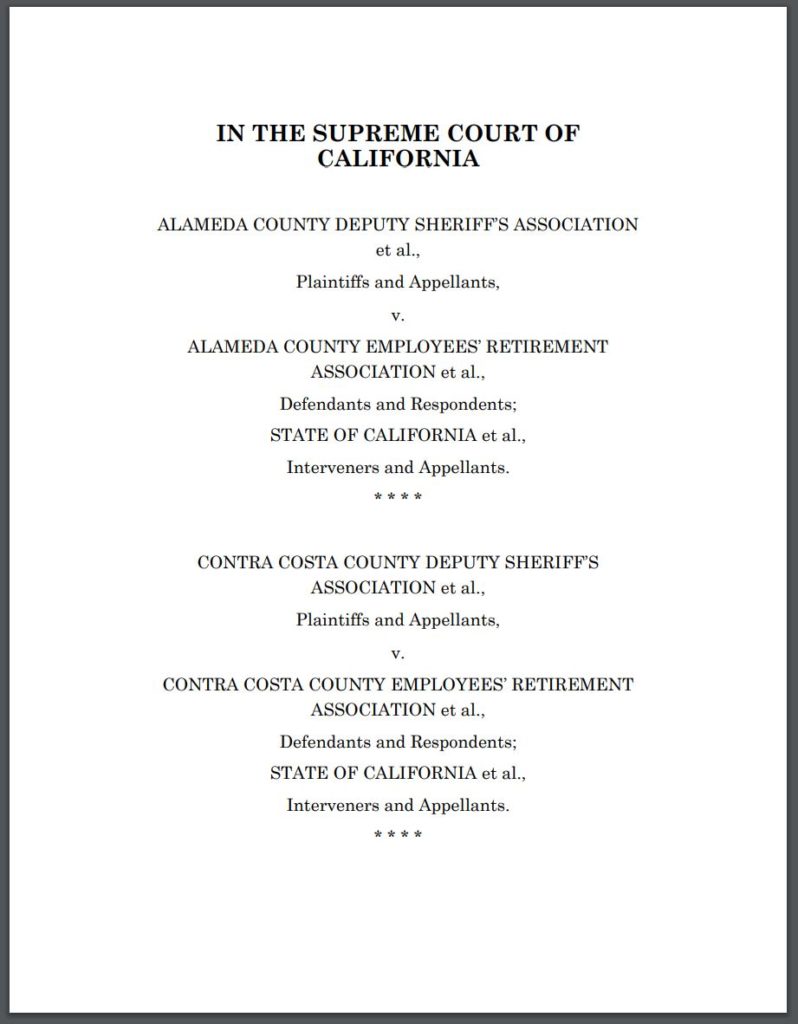 Ten offices across California to serve you.
Contact us now to schedule a free consultation.
Contact form not loading? Click here!
Rains Lucia Stern St. Phalle & Silver, PC publishes this website as a service to our clients and other friends for informational purposes only. It is not intended to be used as a substitute for specific legal advice or opinions, and the transmission of information through this website is not intended to create an attorney-client relationship between sender and receiver. Internet subscribers and online readers should not act upon this information without seeking professional counsel.
We use cookies on our website to give you the most relevant experience by remembering your preferences and repeat visits. By clicking “Accept”, you consent to the use of ALL the cookies.
Do not sell my personal information.
Cookie settingsACCEPTREJECT
Privacy & Cookies Policy