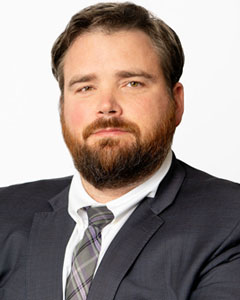 Jonathan Murphy is an associate in the firm’s Legal Defense of Peace Officers Group. Jonathan has experience in the representation of peace officers in discipline matters and criminal cases.

Jonathan earned his law degree from the University of San Francisco.  While in law school, Jonathan won the CALI award for excellence in Legal Research and Writing and was awarded the ABA-BNA Award for Excellence in the study of Labor and Employment Law.  Also, while in law school, Jonathan served as a mediator for the San Francisco Superior Court, Small Claims Division, and was the President of the Labor and Employment Law Students Association.

Jonathan received a BA in Political Science from the University of California, Berkeley.  While at Berkeley, Jonathan was a member of the Golden Bears Football team where he was twice named to the All-Pac-10 Academic-Team, honorary mention.

Besides California state courts, Jonathan is licensed to practice in the U.S. District Court for the Eastern District of California.