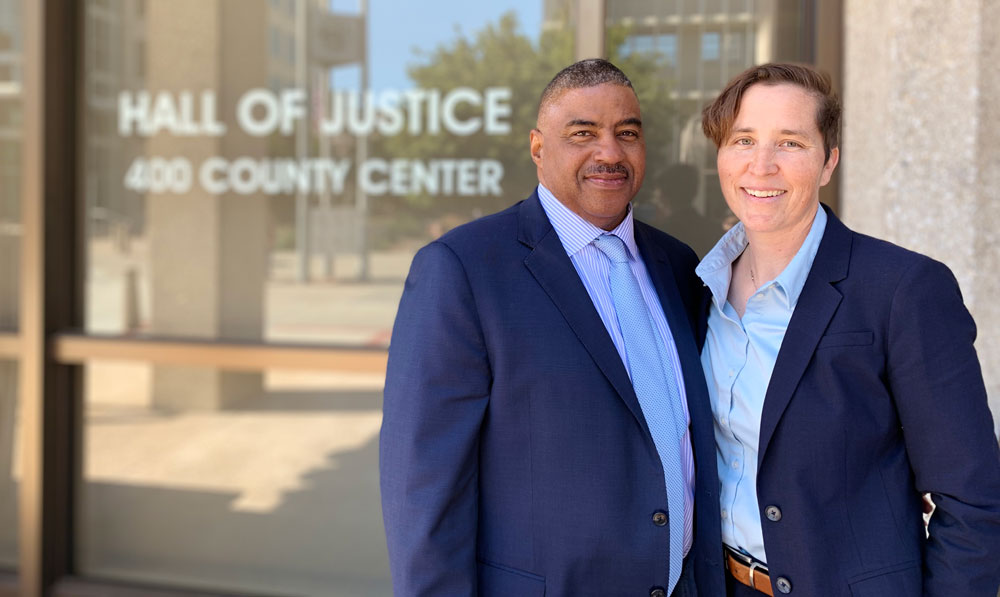 Redwood City, California – Using a power that is rarely exercised, Judge Gerald J. Buchwald granted a defense motion to dismiss the charges in the criminal assault under color of authority trial of San Francisco Deputy Sheriff Linton Martin. A jury listened to several days of evidence and attorneys were poised to make closing arguments when the Court took this dramatic step.

The case arose out of a June 21, 2017 altercation in the San Francisco county jail located in San Bruno, California. A man in custody with a history of violent assaultive behavior sucker-punched Deputy Martin while he was moving two inmates. The trial hinged on the issue of whether Martin’s reaction to being attacked constituted reasonable self-defense or excessive force, as claimed by the San Mateo District Attorney’s Office.

“This case was brought to trial because it’s fashionable right now for D.A.’s to criminally charge police officers, even in situations like this one where there is a complete lack of supporting evidence,” said Martin’s lawyer Nicole Pifari of Rains Lucia Stern St. Phalle & Silver, PC.

Evidence adduced at trial painted a confused and chaotic portrait of the struggle, with no definitive testimony regarding Deputy Martin’s response to being attacked. The prosecution argued that the inmate was in handcuffs at the time Deputy Martin allegedly attempted to subdue him, but several witnesses refuted this claim.

"Deputy Martin was the victim of a crime. He was punched in the head and injured by an inmate who has been convicted of several brutal crimes. Whatever force that was used in the moments afterward was completely reasonable. The inmate wasn’t injured, nor did he even complain," added Pifari.

In making his ruling Judge Buchwald pointed to the lack of evidence of whether or not the inmate was in handcuffs, whether Deputy Martin had even managed to strike him, as well as the short amount of time that passed between the inmate punching Deputy Martin and Martin's attempt to control him. The Court took the additional step of entering a judgement of acquittal, finding that the Sheriff’s Department may have violated Deputy Martin's due process rights by failing to consider the effects of the inmate attack on Deputy Martin’s response.

"I am extremely grateful for the court's wisdom and courage as well as the tremendous lawyering by Nicole Pifari and the RLS team," said Deputy Martin.

Although the decision was taken from their hands, a number of jurors hugged and congratulated Martin once the case had been dismissed.

This is the second major criminal trial victory for RLS this month. Earlier in May, RLS founding principal Mike Rains and partner Justin Buffington won an acquittal for a Rocklin police officer in a felony excessive force jury trial.

We take great pride in our repeated successes representing the men and women of law enforcement. When you need the Ultimate Backup, you have the RLS team and dedicated, talented lawyers like Nicole Pifari on call 24/7. It’s what we do.

Nicole Pifari, a former police officer, is a member of the Legal Defense practice group who handles criminal and administrative cases.

Ten offices across California to serve you.
Contact us now to schedule a free consultation.
Contact form not loading? Click here!
Rains Lucia Stern St. Phalle & Silver, PC publishes this website as a service to our clients and other friends for informational purposes only. It is not intended to be used as a substitute for specific legal advice or opinions, and the transmission of information through this website is not intended to create an attorney-client relationship between sender and receiver. Internet subscribers and online readers should not act upon this information without seeking professional counsel.
We use cookies on our website to give you the most relevant experience by remembering your preferences and repeat visits. By clicking “Accept”, you consent to the use of ALL the cookies.
Do not sell my personal information.
Cookie settingsACCEPTREJECT
Privacy & Cookies Policy