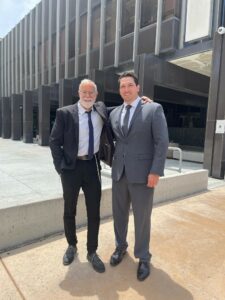 After deliberating for less than one day, an Orange County jury acquitted former Anaheim PD Officer Dillon Avila of filing a false police report, a felony.

In April of 2018, Dillon and his partner made a routine traffic stop. During a search for the suspect’s driver’s license the officers discovered drugs, scales and packaging material.

The police report stated that the driver gave consent to search the vehicle, a backpack and a bag in the trunk (where the contraband was hidden). However, the officers’ body worn camera video revealed that the suspect specifically, and unequivocally, stated that he did not give consent to the searches.

At trial, through cross examination, Michael Schwartz pointed out that although Dillon’s name was listed as the author of the report, his partner’s name was listed as the officer who submitted the report. Schwartz’s skillful questioning brought out that, based on the computer system at Anaheim PD, there was no way of knowing which officer actually submitted (filed) the report. Schwartz also called three character witnesses to testify regarding Dillon’s stellar reputation for honesty.

In his closing summation, Schwartz argued that the prosecution failed to prove three of the five required elements of the alleged crime, and that any mistakes in the report were just that—mistakes. The jury ultimately agreed.

Dillon and his family, in tears, expressed their heartfelt gratitude. Dillon said he was particularly thankful for top-rated trial lawyer Michael Schwartz and his team at RLS.

Michael D. Schwartz is Of Counsel/Senior Trial Counsel for RLS.