In a Notification issued by the California Police Chiefs Association (“CPCA”) earlier this week, California Attorney General Xavier Becerra outlined the Department of Justice’s “responsibilities under Senate Bill 1421” to not apply the new law retroactively: 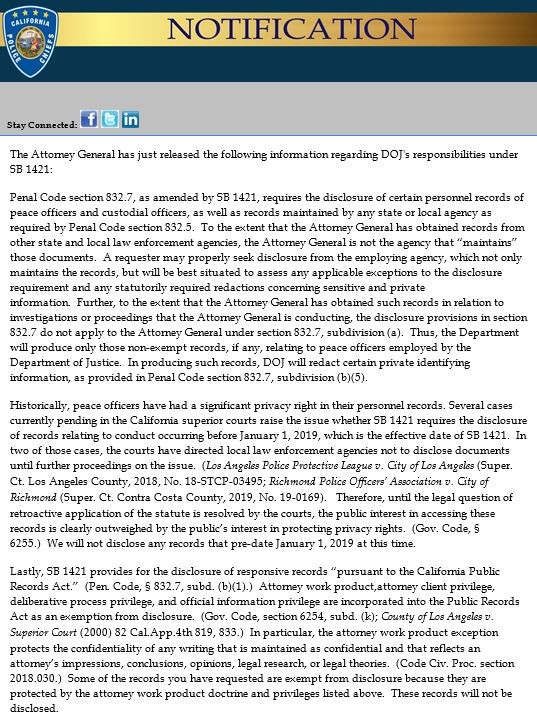 As stated, Attorney General Becerra has decided to refrain from releasing personnel records of peace officers that “pre-date” SB 1421’s operative date – January 1, 2019 – “until the legal question of retroactive application of the statute is resolved by the courts,” because “the public interest in accessing these records is clearly outweighed by the public’s interest in protecting [the] privacy rights” of peace officers. (Gov. Code, § 6255.) In making this decision, Attorney General Becerra acknowledged that “[h]istorically, peace officers have had a significant privacy right in their personnel records.”

We hope and expect that law enforcement agencies throughout the State of California will follow the lead of Attorney General Becerra and not apply SB 1421 retroactively, by refraining from releasing personnel records that pre-date January 1, 2019. Such a decision is consistent with peace officers’ right to maintain the confidentiality of their personnel file information prior to the operative date of SB 1421 and the Legislative intent of the new law.